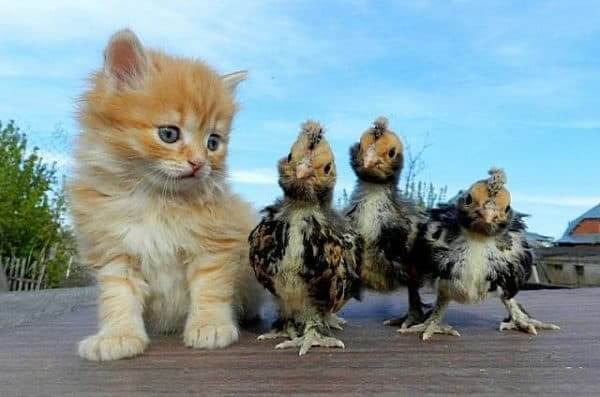 With the appearance in 2008 of new instruments – binary options , their first users applied strategies and tactics of trading from the Forex market . Despite the differences in trading currency pairs and buying option contracts on them, this practice of exchanging experience is relevant to this day.

In turn, the Forex market borrowed one of its trading tactics from gamblers – casino gamblers. It consists in unidirectional trading with constant opening of orders when the loss increases by a certain amount. And today we want to offer you two strategies for working with averaging positions in binary options: simple and advanced. 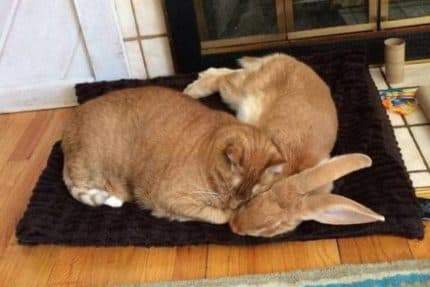 To save a losing position, two types of trading are used, which have received the following names:

This tactic assumes that the trader can avoid a loss in the event of an erroneous forecast by averaging the entry price. This will allow it to close to zero on the correction, when quotes bounce in the previously selected direction. 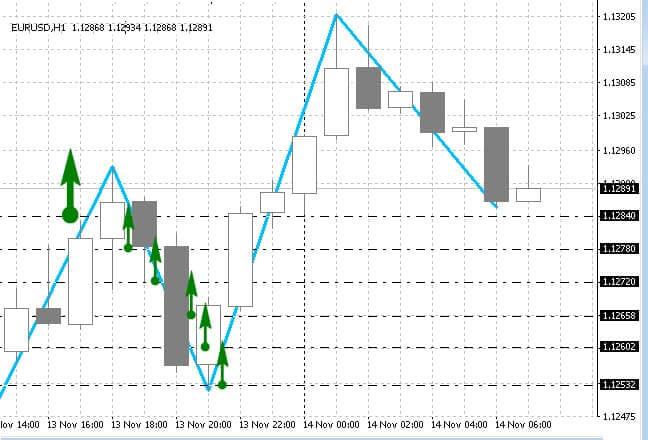 Both strategies are subject to constant criticism, however, Martingale and grids have been used in the Forex market for about 30 years.

“Grid” and “Martingale” on binary options 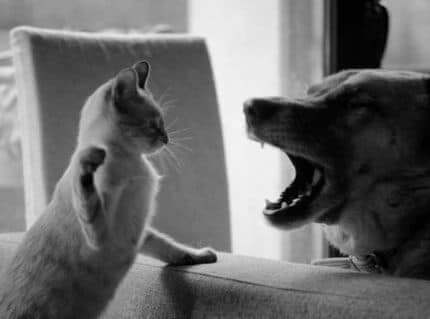 The above tactics are applicable only for binary options “Higher / Lower” due to the similarity of principles with trading on currency pairs. The buyer of option contracts makes a profit if the price has changed in the correctly predicted direction.

The difference in trading currencies and options for it lies in the presence of an expiration time that limits the duration of the contract, while a forex trader can hold a position until the deposit is completely exhausted or profit is taken at any time – at will.

That is why the grid strategy – the withdrawal of new orders after a certain step of falling or rising quotes – is not used in binary options. The reason is that the trader “until the last minute of expiration” believes that a losing trade will turn into profit and there is no point in opening new positions as the price moves. In addition, a very small number of binary options traders are able to place pending orders for these contracts in order to automatically enter a deal when the price changes.

Martingale, on the contrary, is widespread and widely advertised in this market. The strategy was born for roulette and card games. After losing, the players constantly raised the bet for the same outcome: one color or even / odd, the probability that the next hand will score more points than the opponent’s, and so on.

Therefore, in binary options, the same scheme operates – after the loss of the option premium, the trader opens the same “Higher” or “Lower” contracts, constantly increasing the amount of investment.

Fatal error of the Martingale strategy on binary options 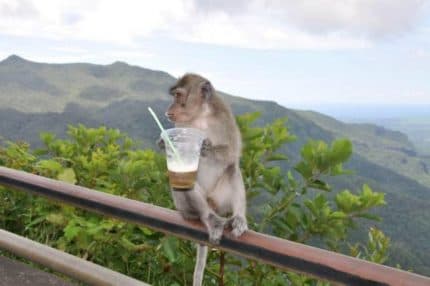 In the materials posted on the Internet describing the Martingale strategy on binary options, there are many tips for choosing the right entry point, but none of them say anything about changing the expiration time.

If the trader does not increase the duration of each subsequent option, he will doom himself to drain the deposit. This is due to the peculiarity characterizing the directional movement within the day – the formation of long, recoilless sections by the quotes.

Suppose a trader trades within the day on binary options with expiration within the hour. Look at the hourly chart of EURUSD (the situation will be the same on small timeframes ). During 10 working sessions on the chart, it is easy to find 15 multi-hour recoilless areas of growth or decline.

If a trade on binary options “High / Low” brought a loss, then there is a high probability that the trader went against the direction of the trend . When entering this recoilless area, the Martingale trading is doomed to get a huge minus. Forced to constantly increase investments in a binary option according to the Martingale strategy, in order to bring the first deal by $ 25 to zero, already on the seventh option (knee), more than $ 5000 will need to be invested.

Pay attention to the chart again – if you do not increase the expiration time, the probability of the ruin outcome described above is more than 50%. 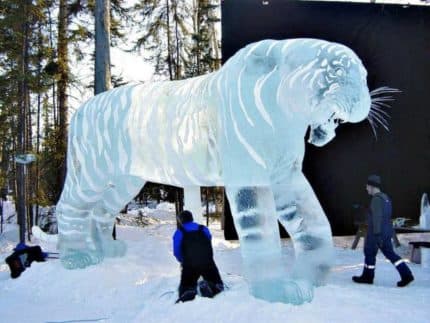 If a trader decides to constantly use the Martingale strategy – to buy contracts “Higher / Lower” in order to recoup the minus of the first investment in a binary option written off at a loss, then to determine the next points for a reversal, he needs to use reliable levels or zones that are likely to guarantee reversal of quotes.

Trading with Fibonacci levels can be a simple strategy for finding points to buy additional options . These are the percentages dividing the segment of the trendchosen by the trader into retracement levels, from which the price often repels. They are built automatically, the indicator is present in many terminals, for example, freely available platforms TraidingView .

By placing the indicator at the beginning of the trend and stretching the grid to the point where the reversal occurred, the trader receives the pre-built levels of a possible price rebound. The main lines are considered to be 38.2%, 50% and 61.8%. 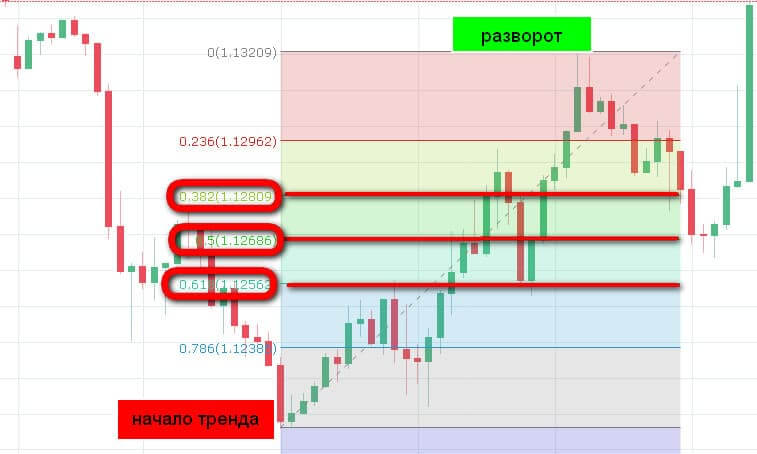 The second type of Fibonacci indicator required for a simple Martingale strategy on binary options is the “Fibonacci Time Zones”. Pivot points in future time are predetermined using a horizontally stretched grid. That is, by connecting two points at the bottoms of a falling trend or tops of an uptrend, the trader receives a specific entry point (in time) into the option. 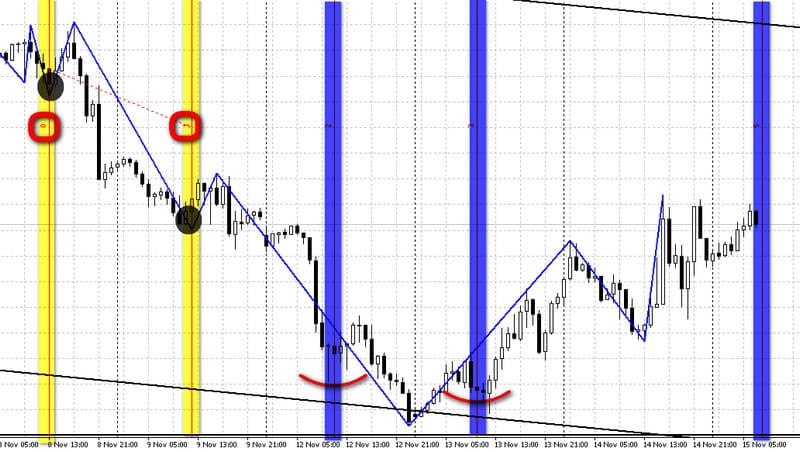 The rules of a simple Martingale strategy on binary options 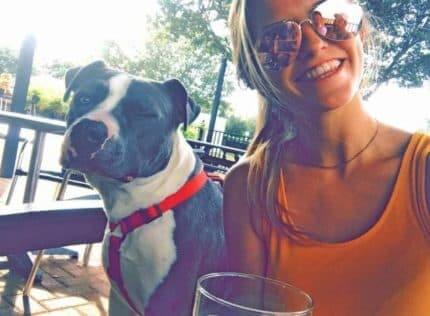 A simple strategy is used to average a previously opened position as an addition to the trader’s existing trading system to help avoid the resulting loss.

These additional binary options are opened by indicators:

The direction of the trend is determined using the ZigZag indicator :

When choosing a variant of the Fibonacci indicator, a trader is guided by the following rules:

Trades are limited to two entries, while the last lot must be twice as high as the first investment, that is, if the first lot is $ 20, then the next two are $ 20 and $ 40.

The expiration step of binary options opened according to the Martingale strategy should be averaged over time, moving along the standard timeframe ruler. It is common for all terminals – in minutes: M1, M5, M15, M30; hours: H1, H4; days D1 and weeks W1. 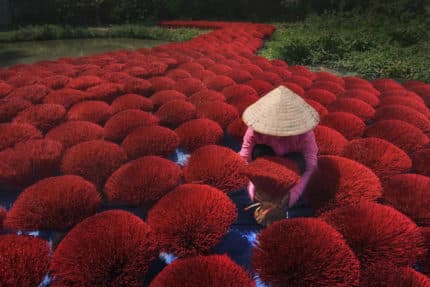 Let’s consider an example of trading in Fibonacci time zones on binary options “Above / Below” according to the Martingale strategy, with averaging the position over the expiration time. Let’s choose the duration of the contract – 1 hour. This will determine the size of the timeframe for chart analysis. To automatically detect the tops and bottoms of the trend, we use the ZigZag indicator.

In the middle of the session, based on the analysis, the trader bought an option “Below” with an expiration period of 1 hour, having invested $ 10 and got a loss. According to the rules, the second contract must be equal to $ 10 and open in the same direction as the first, that is, “Below”.

Based on two growing tops (one of which is selected before entering a trade ), we determine that the trend is growing, which means it goes against the position, which implies the choice of Fibonacci time zones. Since the ZigZag can redraw the signals, the second top is confirmed by the subsequent formation of the bottom.

Let’s place the time zones at two highs to determine the entry point for the second contract, which should have an expiration time of 4 hours. Having closed in positive territory, the binary option compensates for the losses of the first one if the trader has chosen a contract with a 100% premium. Otherwise, the position should be increased by the level of missing up to 100% coefficients. For example, if the payment for the correct outcome was 80%, you would have to invest $ 12. 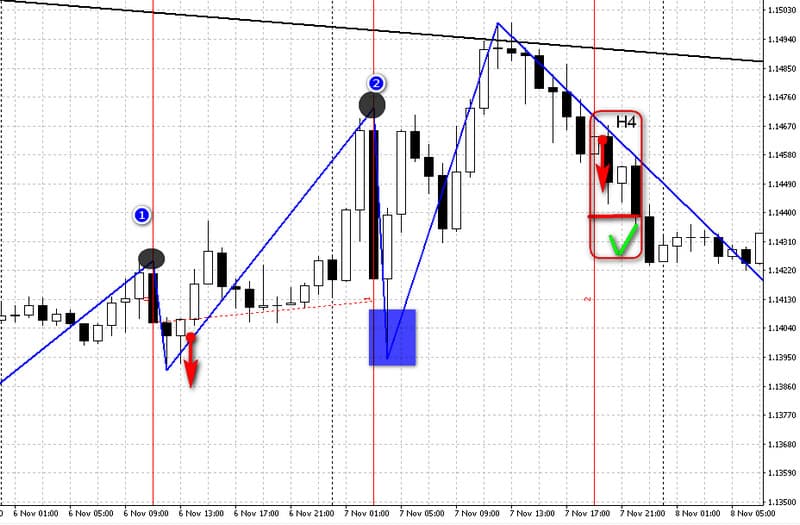 In the second case, the trader correctly identified the direction and bought the binary option “Below”, but the price rebound led to a loss.

Judging by the next two minimums (one lower than the other), the trend remains directed downward, towards the averaging deal. Therefore, the trader needs to enter the rebound, which will be determined by the Fibonacci levels of 38.2%, 50% or 61.8%.

According to the Fibonacci rules, we stretch the grid from the last peak to the current minimum (to point 2). According to the Martingale tactics, the signal to open a binary option “Below” will be the first reversal candle from any of the listed levels, in this case it was the 38.2% line. The option expiration time is 4 hours, the investment amount is equal to the first contract. 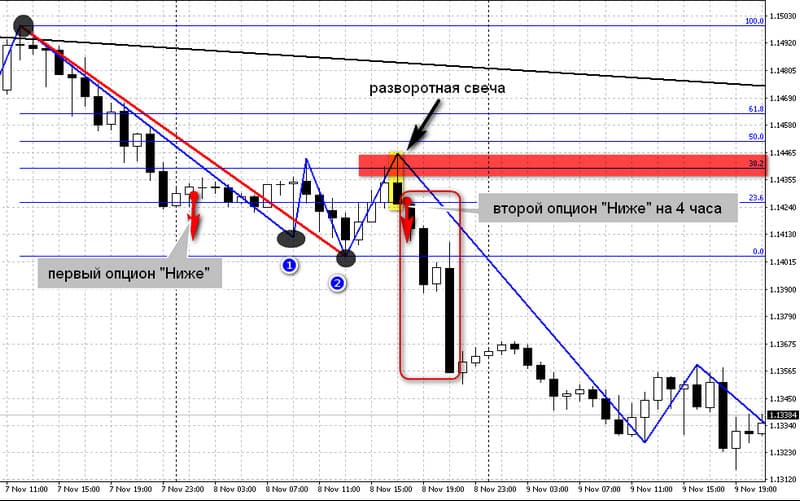 Description and rules of a complex Martingale strategy on binary options 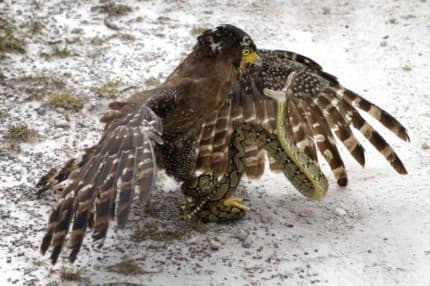 The complexity of the proposed Martingale strategy on binary options lies in the involvement of such a tool as standard options in the analytics. Unlike binary contracts, these contracts are standardized in terms of expiration time and opening price (strike).

The latter circumstance is used for analytics – the CME Chicago Exchange, the leader and international center for options trading, publishes the number of open positions in contracts at each price level of a currency pair. This so-called open interest suggests significant levels from which quotes can bounce.

Options for currency pairs are located in the FX section, a trader can select a specific pair and expiration period per week or month. The required level is visible by the maximum size of the histogram, as a rule, from Put-contracts located on the left, quotes bounce up, and Call-levels on the right provoke a decline in the currency pair. 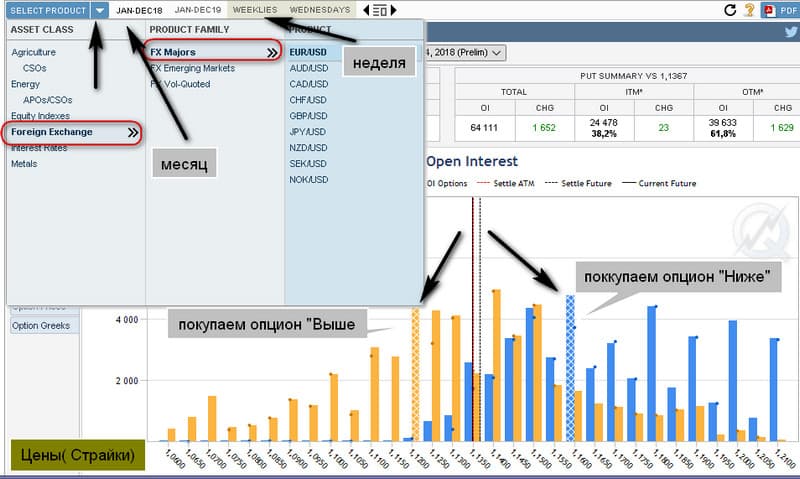 Trading rules for a complex strategy:

In the event of a loss, we immediately open a new binary option in the same direction with an investment of 1.5 times higher and an expiration of 4 hours. In case of a negative outcome, we open a contract for a day, increasing the investment by three times. This tactic is justified by 90% closing in plus of contracts at monthly levels and 75% by profitable closing of contracts at weekly levels.

Monitor constantly, because the strategy does not work when the quotes repeatedly cross the levels of a standard option.

As an example, we can take the situation in the weekly standard EURUSD options, on Friday (the report is late for a business day), which registered a fall below the maximum PUT interest.

Therefore, on Monday at 9-00 Moscow time, the “Higher” option was opened with an expiration time of 1 hour and an investment of $ 10, which brought a loss. The additional binary option “Above” opened at 10-00 closed in plus after 4 hours, covering the loss of the first one and bringing the total profit, since the size of investments in the contract was $ 15. 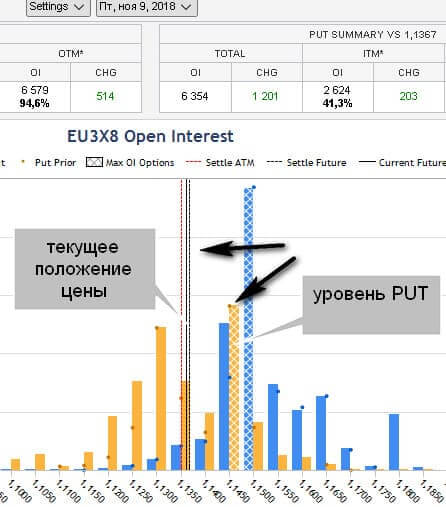 The next example on the USDCHF pair shows that at the moment of expiration the quotes of the pair were below the Put level, but this signal was ignored due to the anomaly – the Put level was lower. You should also pay attention to the fact that the CME exchange does not recognize reverse quotes, so the levels for USDCHF are read the other way around – sell is a buy signal, buy is a sell signal. 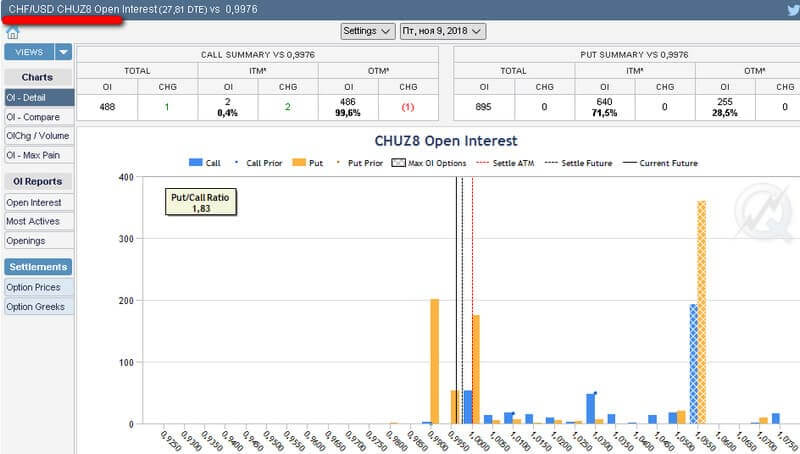 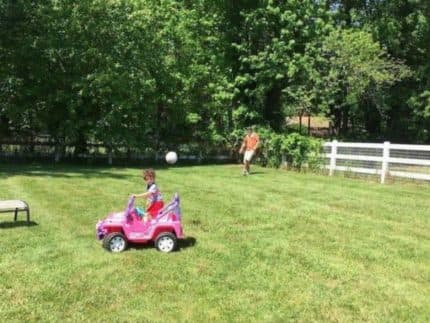 And, summing up, we can conclude that averaging positions in binary options has a right to exist. Thanks to ready-made work strategies, a trader can both compensate for possible losses, without which work in the markets is impossible, and potentially increase his income. At the same time, you should never forget about money management and risk a percentage of your deposit in one transaction!

0
In this article, we will consider Pin Bars and Binary Options – a strong