Proper money management combined with an effective trading strategy is a necessary component of successful binary options trading. The safety of the deposit and the growth of income depend on this. We will not consider trading strategies here, but we will figure out what part of the deposit can be invested in each deal and in what cases it can be increased or decreased. By changing the size of the position, the trader can maximize the return on the invested capital.

As there are trading strategies, money management systems are designed in the same way . There are a great many of them, but here we are examining those of them that are known as “martingale”. These systems can be divided into two groups. These are, in fact, Martingale and Anti-Martingale, which is also called positive or positive martingale. Its main difference is in the safety of use.

To calculate the amount of bets on one of the positive martingale systems, American traders have developed an online calculator , now available on our website. How to use it in relation to our conditions – we will consider in today’s material. 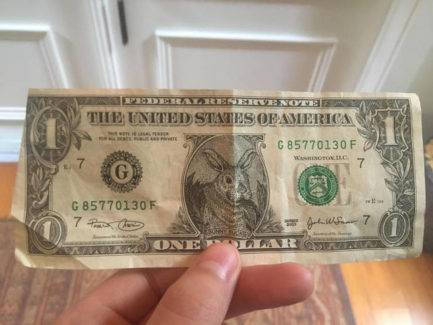 This system has been known for hundreds of years, although it is not clear who its author is. It has been and is still being used in gambling (roulette and so on). The principle of the classic martingale is to double your bet if you lose. If you win, the bet remains the same. The player remains in the black even after a series of losses and one win. In theory, such a system is a win-win.

But in practice this is not possible. The fact is that after a streak of 10 losses, you need to bet the amount 1024 times higher than the initial one. In this case, the winnings will be equal to the initial bet. That is, the player risks a huge amount for the sake of a scanty win. Moreover, now this system cannot be applied in conventional casinos. The owners of gambling houses have long understood the danger of this method and have limited the size of the maximum bet. There are no such restrictions in modern online casinos, but there are often streaks of 11 or more identical results, which leads to the loss of any deposit. There are also varieties of martingale with an increase in the rate not exponentially, but in an arithmetic progression – with a limit on the number of bets and the like.

With the advent of the Forex market , and then binary options, martingale has received a new use. Here it looks more attractive, since it is possible to somehow predict the result. The likelihood of getting a long losing streak is greatly reduced. A huge number of manual and mechanical trading systems based on martingale have been created. Indeed, for short periods of time, it is possible to make money using such systems. But the market sometimes experiences sharp strong movements in one direction. If the system is set against such a movement, then the loss of the deposit is inevitable. In addition, Martingale trading on Forex is associated with complex calculations of the order placement step, depending on the volatility of thefinancial instrument.

The application of the Martingale trading method in binary options is much easier, since there are two outcomes – winning and losing. Although it should be noted that the return in binary options is always less than 100%, therefore, the calculation of the amount of bets on loss is somewhat complicated. If you just double, then the amount won is not enough to cover the loss and make a profit. Therefore, rates have to be increased depending on the percentage of payments. For example, for 85%, the increase will be 2.2 times. There are other features as well. All binary options brokers limit the maximum bet amount. In most cases, this is $ 1000. Thus, it turns out that there are only eight steps from the minimum to the maximum bet. Martingale in binary options can only be used in combination with an effective trading system that gives at least 60% correct entries. 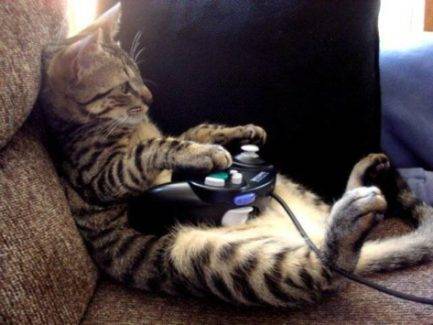 It is not known when the martingale was invented. But changing his rules to the opposite was probably tried soon after. In gambling, this system is called Parlay. The point of this system is to double the rates not after a loss, but after a win. After a loss, the bet returns to the original one. Thus, you can very quickly increase the initial capital and avoid large losses. With regard to binary options, such a system is able to give a good profit with a pronounced trend after several positive trades. To break even, at least three successful outcomes are required. This system is safer than martingale, but less profitable .

Although anti-martingale is safer, there is a risk of losing your deposit. When trading using this system, the level of the deposit drawdown is much lower, which is easier psychologically . However, profitable trades cannot be repeated all the time and the last big bet may turn out to be unprofitable. It is important that this large loss is covered by previous winnings.

In its pure form, the anti-martingale system will be unprofitable if the ratio of won and lost bets is equal. This situation often happens when the market moves flat. 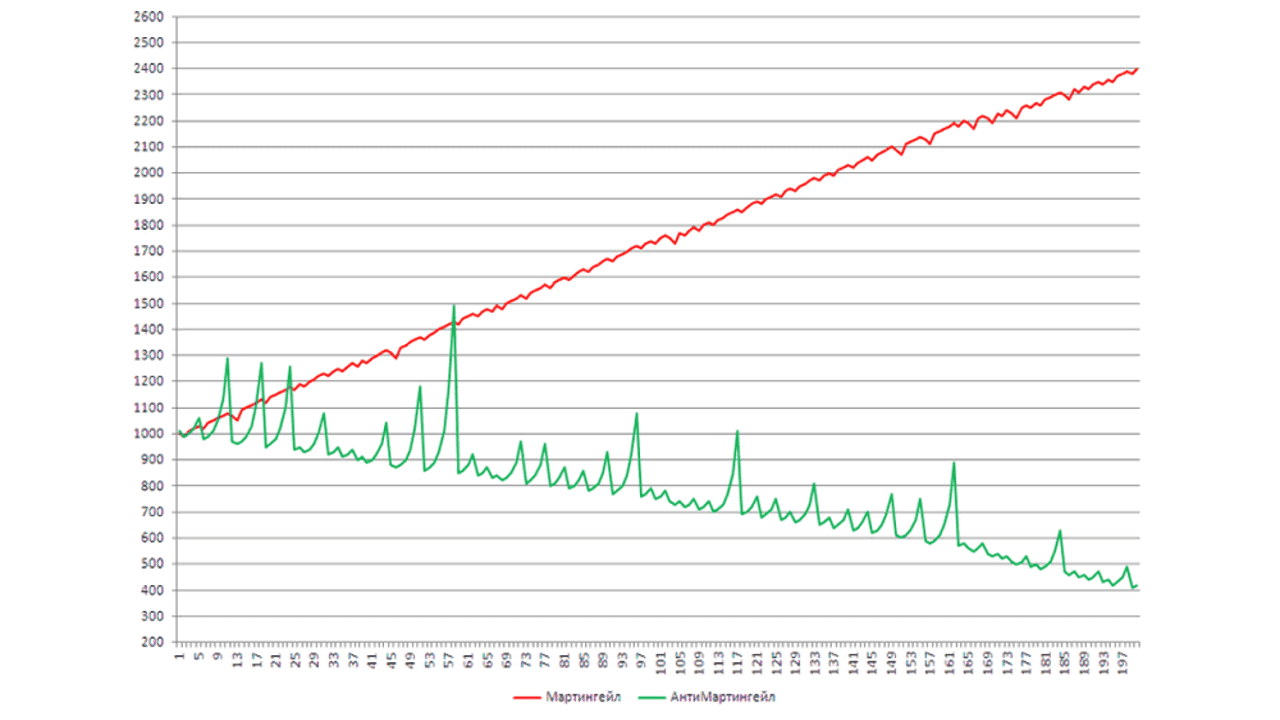 This graph shows the curves of changes in the balance of the deposit based on the results of 200 transactions. The red line is trading by martingale, and the green line is by anti-martingale. The bursts of the green line show that losses are coming out on the last contracts in the series, which steadily reduce the deposit.

To avoid such a situation, you can apply a slightly different tactics to increase investment. To do this, instead of a geometric progression, we use an arithmetic one. That is, each subsequent bet is increased by the amount of the original one. The table below shows what happens. 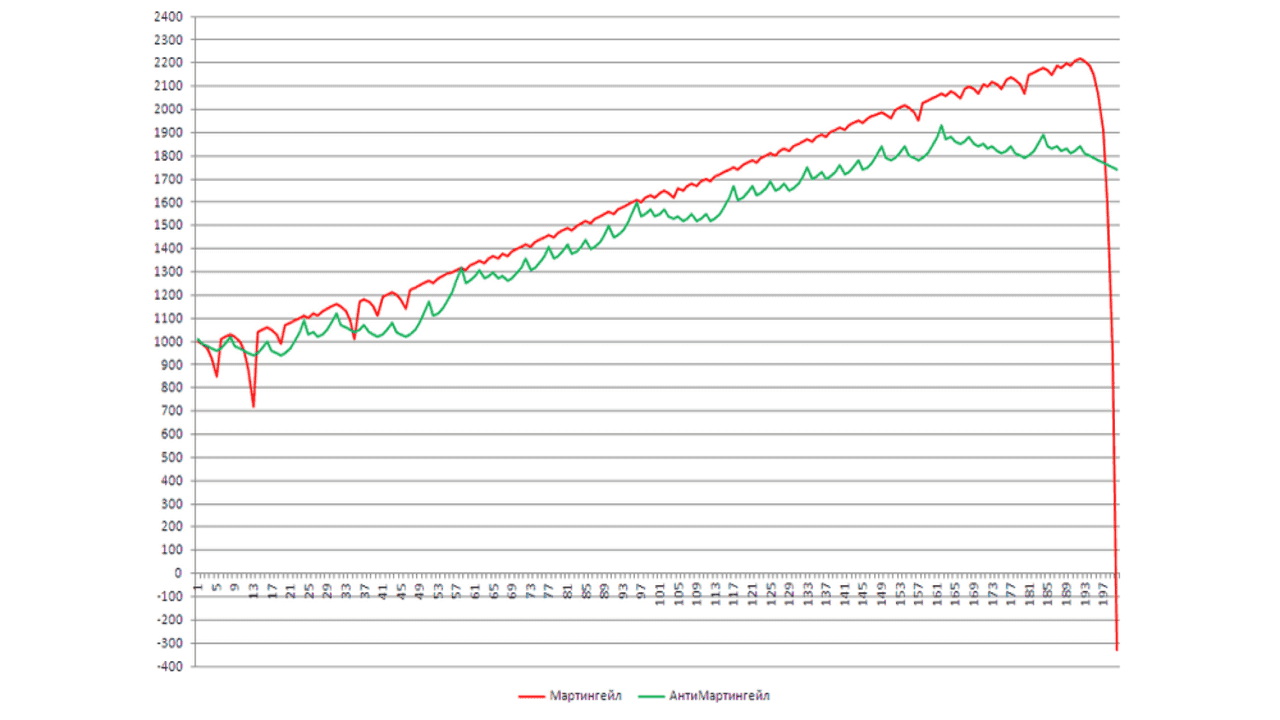 This chart shows that the anti-martingale yield line in an unfavorable situation only fluctuates around one level and decreases slightly, while the martingale system completely drains the deposit.

Each of these money management systems has supporters. The debate about which method is better continues. However, it is obvious that anti-martingale with the right approach is still safer and can bring constant income. This is all the more true if you use techniques to reduce risks and buy options based on signals from a suitable trading system. For example, to reduce risks, you can limit the increase in rates to a certain number of times. That is, after two or three wins, return to the original bet. Or you can double the rate for the first time and continue trading the same volume until a losing trade. 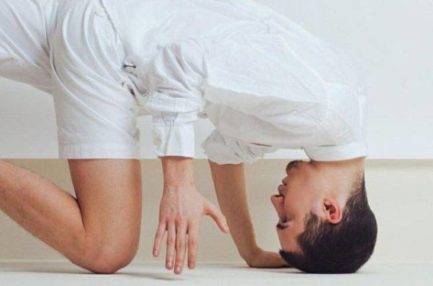 Several American traders, as a result of 12 years of trading binary options, have developed a method to reduce the natural mathematical advantage of brokers. This is a method of limiting the number of bets in anti-martingale, but with its own nuances. When we buy an option, we can get a fixed income of 50 to 90% of its value, but we risk losing 100%. With an equal number of winning and losing trades, we will lose. A positive martingale as interpreted by the Americans should provide an advantage over a broker. The essence of this method is that in case of a win, 80% of this amount is added to the original bet. The number of steps is limited to two or three. Thus, we risk less and less money. 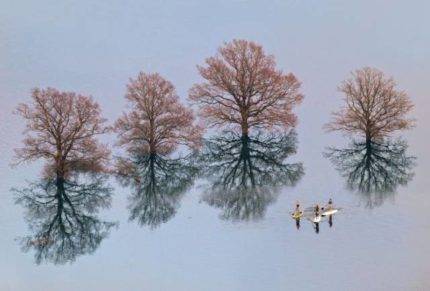 Mathematics can and should be put at the service of your success. Even the slightest advantage over the broker and the market, thanks to compound interest , translates into additional tens of percent of profit. Good luck and see you soon!

0
Hello traders friends! On the net you can often find controversy “Which is better:

0
Creating a profitable  binary options trading strategy is not an easy task. It is

0
Hello ladies and gentlemen traders. Today we are going to break down a few

0
In today’s lesson I will share my experience with you, because if you also

0
Options trading has been known for a long time, but such activity took place